The Riviera Nayarit attracts attention at the 2011 Tianguis Turístico

During the 36th edition of the Tianguis Turístico in Acapulco, which took place from March 25th-28th, domestic and international buyers met with over 500 businesses that provide tourist-related services in Mexico. Riviera Nayarit, through the Convention and Visitors Bureau, carried out consolidation efforts with commercial relations in search of new markets.

Wholesalers from Argentina, Brazil and Columbia showed interest in this destination as they seek out more and better choices for vacationing in Mexico.

South American tour operators consider the Riviera Nayarit ideal for those who enjoy exploring new and interesting areas, with its high-level infrastructure and luxury amidst the beautiful natural landscape, which can easily be marketed to their premium segments.

The jewel of the Mexican Pacific has attracted the attention of agents in the countries mentioned, as well as from Spain and England, as it offers attractive aspects to their visitors such as contact with local culture, biodiversity and gastronomy.

Meetings were also held with European airlines such as TUI Northern Europe, who may begin to bring tourism to the area in 2012. Air Europa declared itself ready to promote new Mexican destinations as soon as its Madrid-Mexico City route begins to operate next June.

Velas Resorts was present during the Tianguis (the most important tourist showcase event in the country) to promote its four resorts; in addition to promoting the Velas brand, they made valuable commercial connections and developed important plans with tour operators.

Grand Velas present at the event: 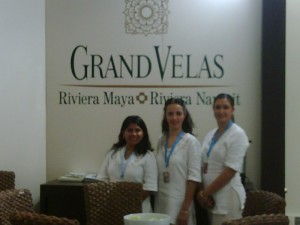