PV Day of the Dead Festivities Paint the City All Week " />

A dear time of year to those of us in Mexico, we welcome you to join us for the 2016 Festival de Día de Los Muertos, as lively parades, ornate altars, live music, authentic food & drinks flow freely through the streets, October 28th-November 2nd. 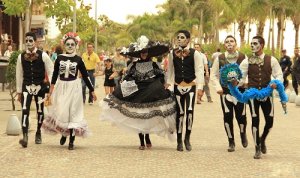 Celebrate Life at the Puerto Vallarta Day of the Dead Festival

All of PV comes alive in celebration of death during Mexico’s most characteristically ironic extended holiday, as the 2016 Festival de Día de Los Muertos blankets the city with ornate altars, intricately painted revelers, and reverent yet festive parades in honor of every family’s fallen. All of this makes the Day of the Dead in Puerto Vallarta one of the best times to visit if you crave an authentic taste of Mexican culture.

This year, Dia de los Muertos just so happens to overlap with the XII International Congress of the Most Beautiful Bays of the World, drawing delegates from 28 countries in six continents to our festive streets. You can bet Puerto Vallarta is taking this opportunity very seriously, planning the biggest, liveliest Day of the Dead Festival in the history of the city. Altogether, holiday events will unfold in 17 spaces across PV, such as:

Thankfully, events during the 2016 Festival de Día de Los Muertos generally don’t conflict. It is helpful, however, to know when the most popular happenings are unfolding. Here are just a few of our favorites: 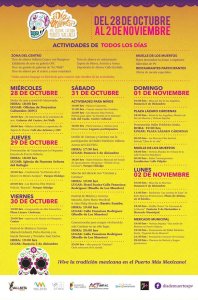 6-10pm – Centro Historico ArtWalk festively ushers in the long holiday with all the typical trimmings. Be sure to grab a guide book at Café des Aristes (Guadalupe Sanchez 740). 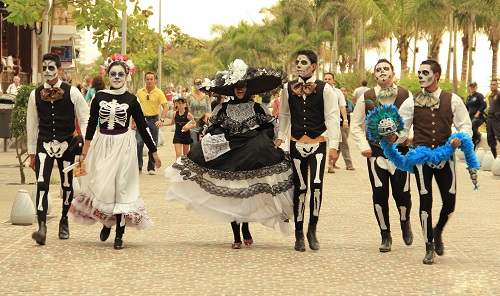