A small part of the fascinating history of the region: La Marinera returns to San Blas - Vallarta Nayarit Blog " />

A small part of the fascinating history of the region: La Marinera returns to San Blas

During the 18th century sailors from Cádiz, Spain were sent by the Spanish crown to the lovely village of San Blas (located one hour north of Puerto Vallarta), with the idea of turning it into the best shipyard in America and a grand entry port for founding new colonies. The faithful Spanish sailors traveled with a sculpture of the image of Nuestra Señora del Rosario (Our Lady of the Rosary), or La Marinera, a faithful reproduction of La Galeona de Cadiz. Upon arrival, La Marinera was placed in the port, where she was revered through chants and prayers to obtain her blessing and favors.

In time, the original group of sailors was ordered to launch expeditions into the north Pacific, and with a volley of gunfire, bid farewell to their protector who was later transported to her current sanctuary in the old village.

The image suffered a fire and although she was replaced, she was lost again on two more occasions in the city’s history. In spite of this she was always replaced thanks to the contributions of the faithful Spanish sailors stationed in San Blas. However, with the start of Independence and the abandonment of maritime activity, the Spanish sailors left and took with them their devotion to La Marinera. 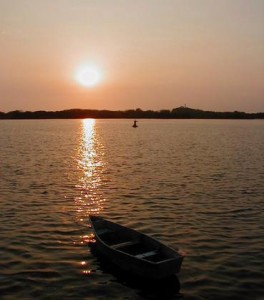 It wasn’t until the 7th of August, 2000 that a new replica of the image was presented to the fishing village of San Blas by Don Miguel de la Cuadra-Salcedo, a direct descendant of the First Commander of the Naval Department of the region, with the objective of restoring the old tradition and faith in this image.

And so, this 7th of October San Blas commemorates 10 years since the worship of La Marinera returned to the town. Great festivities are planned, including a pilgrimage from La Villa to the city center. The chants, prayers, songs, dances and entire parade will bring new life to this celebration from the 18th century.