On August 9th, the International Day of Indigenous Peoples takes place; this important festivity has been celebrated since 1995 when the United Nations General Assembly choose this date to remember the efforts to promote and protect the human rights of these cultures. The main objective of this celebration is to recognize indigenous communities as the legitimate heirs and keepers of traditions, values, languages, and symbols that strengthened our national cultures.

In honor of such an important date for the native communities around the globe, we would like to recognize and praise two of the most relevant Mexican cultures, which are linked to the origin of some of our destinations.

The greatness of the Mayan people speaks for itself, the mysticism, scientific knowledge, and the contributions to contemporary culture make them a representative element of Mexico. Their settlements include the territory of the Mexican states of Yucatan, Campeche, Quintana Roo, Chiapas, and Tabasco, as well as some areas of Belize and Honduras

The Mayans left a wide legacy which includes important astronomical advancements and knowledge, for example, did you know that their calendar was more precise than the Gregorian calendar? They are also responsible for the creation of the majestic archeological sites in Riviera Maya, such as Chichen Itza one of the seven wonders of the modern world; and one of the best-known worldwide rituals: the descent of Kukulcan during the spring equinox.

If you are chewing gum lover, you’ll also be grateful to this culture, several historiographers point out that Mayans created this delicious candy with the resin of the sapodilla trees; during their times the value of this product was so high that they even used as a currency for barters.

The Sierra Madre Occidental region, which covers the territory of Puerto Vallarta and Riviera Nayarit, enjoys one of the richest varieties of indigenous communities. In 2017, it was counted the presence of 8,000 families of 14 different ethnicities, that includes Nahua, Otomi, Zapotec, Triquis, Mixtec, Purepecha, Cora, Huichol, and Tzotzil.

Many of these groups migrate looking for better living conditions and job opportunities, nevertheless, Huichol or Wixarika people are a native culture of the Sierra Madre mountains, which is particularly striking for being a direct descendant of the Aztecs.

This culture is mostly known for its colorful crafts made with beads or stamens, as well as for their constant efforts to preserve and spread their traditions, beliefs, and rituals among the tourist that arrive to Puerto Vallarta or Bahia de Banderas; some of the symbols most associated with them are the deer, corn, peyote, and the well-known God’s eyes.

On your next visit to our properties in Riviera Maya, Riviera Nayarit and Puerto Vallarta, we invite you to participate in our signature experiences that honor their traditions and discover on your own the treasures both cultures hide. 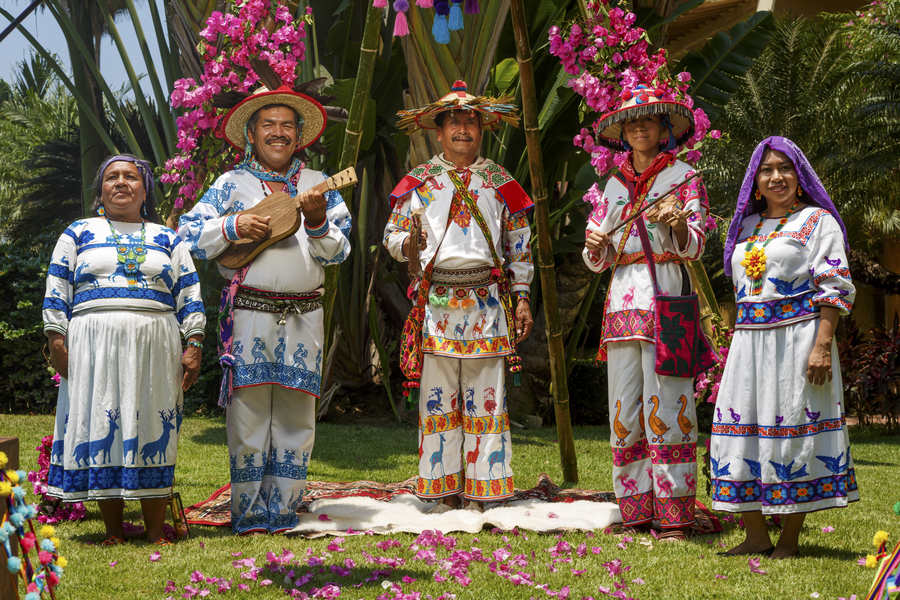