Young chef of Puerto Vallarta will represent Mexico in England " />

Angel Omar Garcia, 23, is a confessed gastronomy passionate and he currently delights guests with exquisite culinary creations at Grand Velas Riviera Nayarit’s Selva del Mar restaurant. Last February 22th, he took part of the Thierry Blouet 2016 contest, which included the participation of 16 top chefs Puerto Vallarta area. Obstacles soon arouse to be overcome: prepare a dish against the clock with quite strict guidelines established by the jury, but Garcia emerged triumphant with the 1st prize in his hands.

After this important achievement in his life, Angel will compete in one of the most historic culinary competitions: Chaîne des Rôtisseurs, in England. Before he leaves, do yourself a favor and visit his restaurant if you are nearby the Nayarit Riviera.

Great part of his cuisine inspiration comes from endearing memories spent with his grandmother, who taught him dozens of cooking procedures to make of every dish a unique creation he still reminisces as uncomparable to any other. Thanks to her, he studied Gastronomy at the Technological University of Bahia de Banderas, from which he graduated two years ago.

His passion meets no limit, and the fact he can reach diners’ palates by expressing all kind of emotions through the dishes he prepares, is his most deep motivation. One of the great experiences he recalls, is that moment when a guest approached him to express her congratulations for the delicious dish he had prepared for her.

He considers himself as an admirer of Ferran Adriá, one of the best chefs in the world and Homaro Cantú, a pioneer in molecular cuisine. His favorite condiments are salt and pepper, as they always add a good touch to meals.

Now, he is about to make a dream come true: to represent Mexico abroad in a culinary festival. Chaîne des Rôtisseurs in Manchester suits perfect in that ideal he has always had  –and excitement can be seen in Angel’s eyes. This will of course represent a challenge, and he must prepare to make a “good role” in the culinary arts.

Congratulations to Angel Omar Garcia. We wish him a resounding success on this next step to accomplish his dreams! 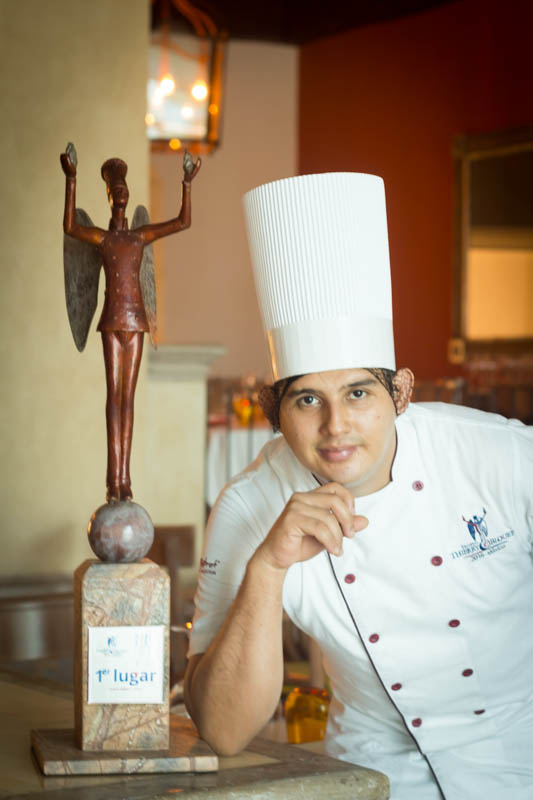