–
Every year on February 2nd Mexico celebrates the Día de la Candelaria, or Candlemas, where the “child is raised” from the nativity scene and the figures or images of him are taken to the church to be blessed. Christmas decorations are taken down and put away for next year as the Christmas season officially comes to an end. 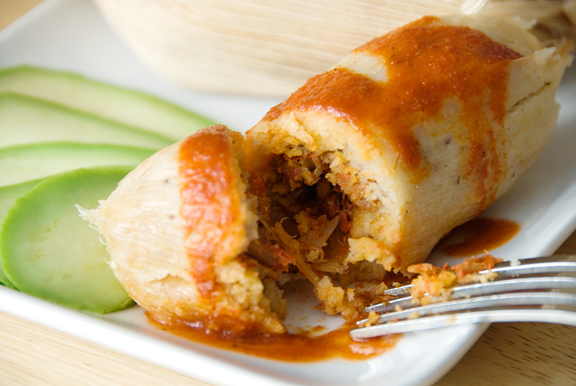 Photo source: http://lossaboresdemexico.com/
–
The celebration observes the day when the baby Jesus was presented in the temple according to Jewish traditions. In addition to the custom of taking new-born babies to the church 40 days after their birth, through the blending of cultures other rituals were incorporated; such as the blessing of the candles, which symbolize Jesus (light of all men). This is why the «Feast of the Candles» became the “Dia de la Candelaria” or Candlemas.

Did you get the baby in the rosca?

In Mexico the Day of the Three Kings is celebrated on January 6th, with family and friends gathering to cut the Rosca de Reyes; this large sweet bread’s oval shape represents the infinite love of God and the nuts and fruit on top are the obstacles that prevent us from finding it. The most interesting thing about the rosca is what’s inside: a tiny plastic figure that symbolizes the baby Jesus, a ring that symbolizes the next marriage and a thimble that represents a person being single for at least one year. Whoever finds the figure of the baby Jesus automatically becomes the host of the next party, which is held precisely on Candlemas.

Photo source: http://www.belelu.com/
Mexicans traditionally gather and eat tamales and atole or hot chocolate; the «good luck» of finding the figure in the bread sometimes isn’t such a blessing, as it actually means you must treat everyone to tamales. But it could have been worse- you could have gotten the thimble.
–
And of course, it is always good to celebrate with loved ones, even if it’s at your expense. So enjoy this day and we hope your tamales are delicious- time to eat!
–
Source:  http://es.catholic.net/celebraciones/120/302/articulo.php?id=1252
–
¿Buscas la versión en español?
Cross-posted at Riviera Maya Blog