The cultural heritage of the Mexican Revolution - Vallarta Nayarit Blog " />

The cultural heritage of the Mexican Revolution

As part of the social and cultural evolution, in Mexico, our history has gradually defined the diversity of our traditions and customs which we still celebrate today. The Mexican Revolution was an armed movement that began on November 20th, 1910, and lasted almost 7 years, but this brought many political and economic changes, and also gave culture a positive turn.

Culturally, the changes before and after of the country are very clear because as throughout world history, any armed conflict has consequences in all areas. Without a doubt, the Mexican Revolution left great changes in art, gastronomy, and technology, so what do you think if we take a look at the magnificent things that this historical event left us?

The musical genres that are traditional in Mexico today (such as mariachi) and that several of them arose due to this event in history, have a background that has transcended and has helped us to understand the general situation before, during, and after the Revolution.

Specifically, we are talking about the corridos, which are songs with stories of the armed struggle and which marked a milestone in the musical field, since their protagonists are political leaders, soldiers, relevant figures among the population, and all the adventures of that time.

Among the most emblematic compositions is La Adelita, which tells the story of a brave woman, Adela Velarde Pérez, who highlighted her participation during the Revolution. In her honor, they named Adelitas all the women who played an important role in this important moment for Mexico. Nowadays, it is a very popular corrido and, among other things, an important evolution of the Mexican social structure is appreciated.

Since pre-Hispanic times, certain ingredients have prevailed through time such as corn and chili, but during the Mexican Revolution, there were some changes in the kitchen. Due to the scarcity of resources and the long trips that the troops made, food had to be improvised with the ingredients they had on hand. Along the way some seeds, chili peppers, and some quelites such as purslane were collected, even exchanges were made for beans and tortillas.

Thus, the Adelitas women started to cook typical dishes that we continue to enjoy today, such as gorditas, quesadillas, soups, atoles, and salsas. Of course, this was generally throughout the country, but in certain areas of Mexico some other delicacies emerged, for example in the center of the country dishes with charales, frogs, jumiles and some other insects stood out. On the other hand, in the north of the country, the discada emerged during that period, as it is an easy preparation that mixes beef, bacon, chorizo, ham, onion, jalapeño and tomato… Delicious with flour tortillas!

During and after the Revolution, the cinema was an important area that closely showed the events that occurred. From this event, national and international filmmakers were interested in venturing into the documentary genre, it was thus that innumerable feature films emerged that showed the most prominent characters of the time such as Porfirio Díaz, Francisco I. Madero, Emiliano Zapata, or Francisco Villa.

The film production of those years was the first step for further development of this area, however, what stands out from the cinematographic area of ??the Revolution is that a large part of its objective was merely political since it began to be used even as propaganda. Filmmakers like Salvador Toscano, who was the first producer of a documentary film in Mexico, followed the trail of Porfirio Díaz and Francisco I. Madero to show the political and social ideals of the time. Similarly, the Alva brothers were pioneers in the production and direction of documentaries, and today the images they contributed have been very important for the study of this historical event.

Very hand in hand with cinema, photography is another cultural field that evolved strongly due to the political, social, and economic changes brought about by the Mexican Revolution. After a difficult time, the world turned its gaze to everything that was happening in Mexico, and with it attracted the interest of many photographers.

During the conflict, photojournalism was accentuated throughout the country and photographers such as Antonio Garduño, who portrayed Zapata; José Mendoza, official photographer of Carranza; Sara Castrejón, the first woman photographer of the Revolution; or Gerónimo Hernández who is the author of the iconic photo of La Adelita. Jewels that allow us to enter such specific moments!

Besides, years later, international photographers such as Paul Strand, also sought to document the cultural change that marked Mexico with this struggle. With this, great artistic photos were framed that presented the beauty of a new era for Mexico.

In any world context, art is always a beautiful expression of social or individual feeling, in this case, the arts were no exception during and after the Revolution. Some painters portrayed the faces of the time, but the artistic movement that the Mexican Revolution inherited was muralism, which is attached to political ideologies and shows various social issues.

Although this movement was already known in the world, in Mexico it was consolidated after the end of the revolutionary struggle. In the works of Diego Rivera, José Clemente Orozco and David Alfaro Siqueiros —representatives of muralism— national changes, both positive and negative, were reflected, and thus today we can immerse ourselves in the new cultural identity that formed this very relevant event in the history of Mexico. 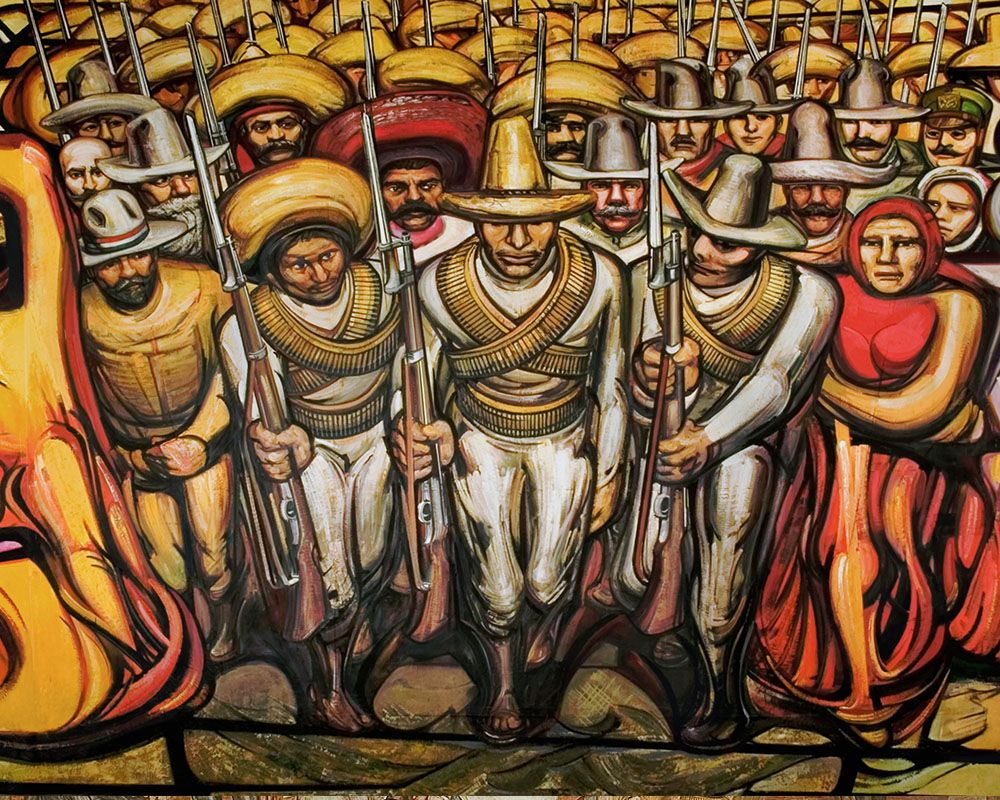