Most visitors experience Mexican art and Huichol culture without knowing anything about the people who make the items, or the meaning of the designs. With communities located in remote areas of the Sierra Madre mountains, the Huichol or Wixarika people mainly live in the states of Nayarit, Jalisco, Durango and Zacatecas, in Mexico. If you’re planning a trip to Mexico and want to discover the marvels of Huichol art, we highly recommend you to consider the following 7 facts:

Featuring colorful decoration and using symbols which date back centuries, the artwork draws you into its compelling world of magic and mysticism. The creation of every piece is so complex that most designs may take even weeks to be completed. 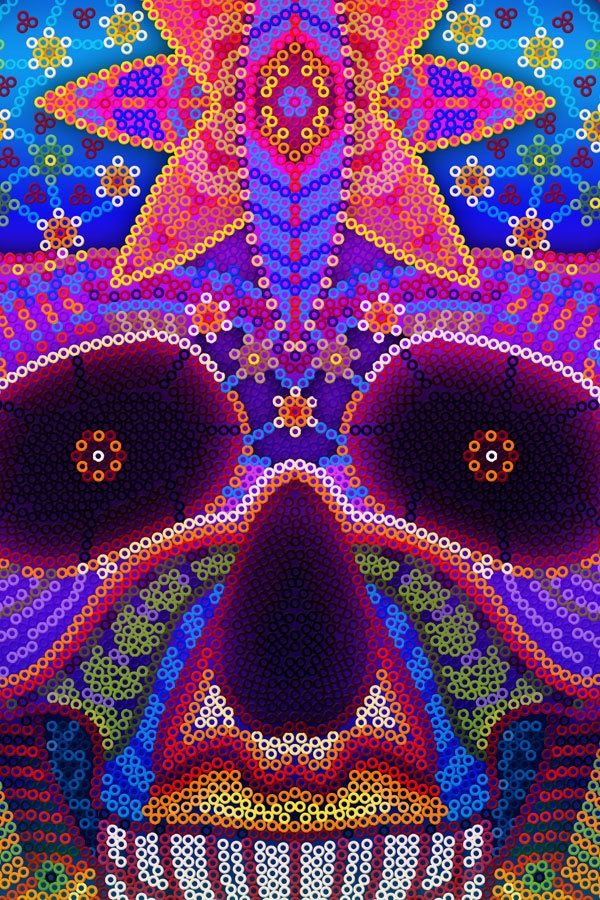 The most traditional items

The yarn paintings and items decorated with beads are the most widely sold pieces. Aside from beautiful Huichol bracelets, you can also find masks and wood sculptures covered in brightly colored beads, fastened with wax and resin.

Urus are ceremonial arrows created to be shot into the air and petition the gods for special blessings. Women and children wear colorful woven bags around their waist to be magically protected. A Kuka is a three-dimensional ceremonial mask, and Nearikas are tablets of wood or bamboo which are heavily decorated into sacred areas.

Close up of the bead work on our large Huichol hand carved and beaded deer head. Our office holds our Huichol collection. They are awesome artisans and do work in both beads and yarn inlaid in beeswax. Deer are a sacred animal ally and guide to the peyote fields.

What are they made of?

The most popular Huichol art is made with yarn and small beads, which have replaced many of the traditional materials such as clay, stone, and vegetable dyes. As these creative items have a long history of beading, the first Huichol jewelry and bowls were decorated with clay, shells, corals, seeds, and more. It’s almost unbelievable!

Most visitors are not aware that Huichol patterns are synonymous with religious devotion. Although the purpose of many items has changed, the Huichol art is still based on a trinity of veneration of the deer, corn, and peyote. The last one is valued for its hallucinogenic properties which give shamans visions.

Did you know that the design of sashes and belts mimic the back of snakes? This animal is associated with rain, good crops, health, and long life. Not only that, another prominent symbol is the zigzag line of Huichol bracelets, which represents communication with the deities. 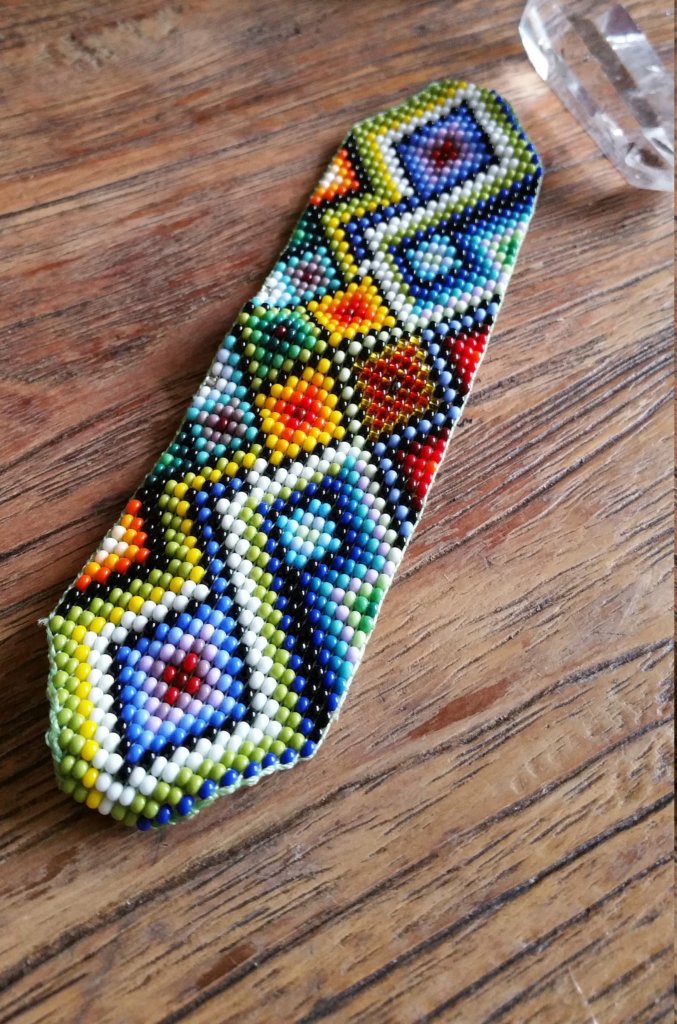 The presence of Gods

Here’s the most interesting part: Huichol art means direct communication with their deities. When ceremonial pieces are made, all aspects from materials to colors are important as they’re related to particular gods.

Known as the Father of Sun, Tatewari represents the earth and the wood of the Brazil tree. Deers, coyotes and pine trees are often associated with the god Tamat’s Kauyumari. And the most important: Takutzi Nakahue is considered the mother of all gods and corn.

Huichol art goes beyond jewelry, paintings, bags, and masks. Altavista Petroglyph Site is one of the largest concentrations of stone engravings. Located among lush flora and fauna, in Nayarit Mexico, the petroglyphs are believed to have been created by the Tecoxquines, an Aztec tribe who was wiped out by disease in the 16th century.

Meant as spiritual callings to the gods, these fascinating engraved stones depict stories of everyday life, such as health, fertility, rainfall, and trade. Today, the site is sacred to the Huichol Indians who sometimes use it for religious ceremonies. Some tourist companies provide tours and transportation.

Renewed Huichol artists include Emeteria Ríos Martínez, who has created a number of yarn painting murals. José Benitez Sánchez is a shaman-artist who helped to expand yarn painting. Pablo Taizán is also a shaman who does beadwork featuring animal figures used in healing.

Santos de la Torre is another famous Huichol artist; he made a great mural for the metro station Palais Royal-Musée du Louvre, in Paris. 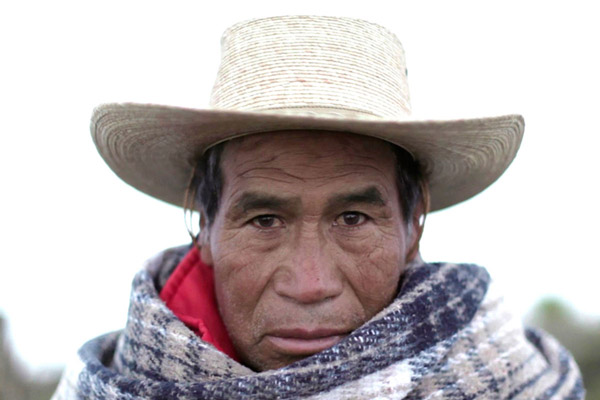 As you can see, in the Huichol culture, there cannot be art without religion. Is there another interesting fact you know about this wonderful culture? 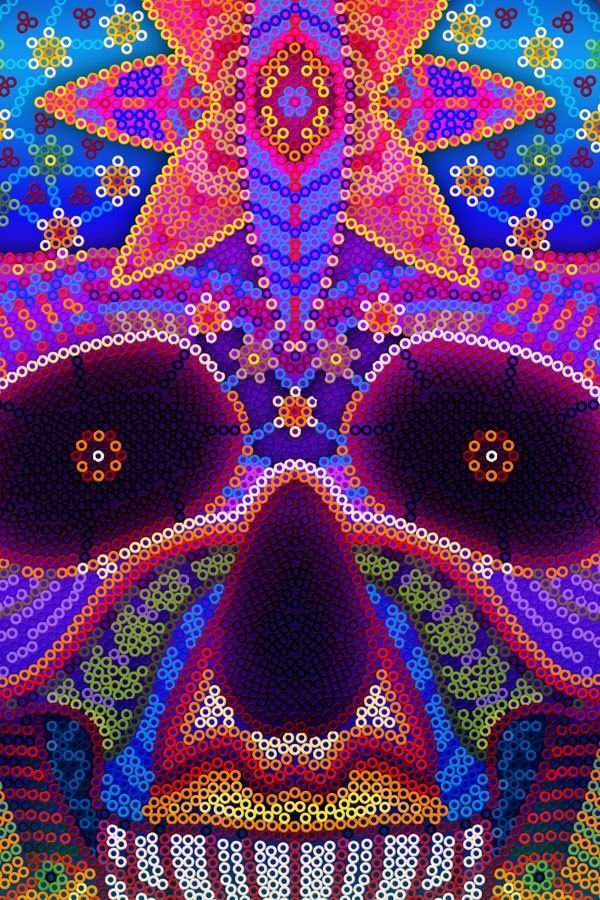